I have spent a great deal of my life trying to reconstruct a moment from adolescence. I was around 16 or 17 and had stayed up all night with friends. We’d climbed the steep green slopes of Cleeve Hill before dawn to see the rolling panorama of Gloucestershire spread before us at sunrise then returned hungry in the early light to the village of Bishop’s Cleeve. 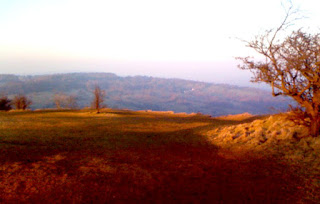 I arrived back at perhaps 5.00am to a perfect dawn. I was now alone and walked along empty streets where, instead of people I was greeted by extraordinary birdsong that came from every tree and rooftop, from every direction. It was spectacular, something so miraculous that it was hard to believe I had slept through it most days of my life – each bird had its own song, unique, equal and beautiful, forming part of a greater whole that was constantly, endlessly reinventing itself. As I walked I was immersed in the sound, the detail of one song emerging as another faded, occasionally a bird flying right overhead. The familiar landscape of the village seemed magically redrawn by it. I simply listened and admired. In some deeper as yet unarticulated way I felt connected to the song in a way that was wholly different from the music I had been listening to as a teenager, I had an intuitive feeling that my own ‘song’ was somehow a small part in this mighty chorus.

Back then there was no way to link this experience to the Led Zeppelin inspired music I was playing in bands but the idea of equal individual voices each with their own rhythm and melody led me towards the counterpoint of Bach and later on to the structured improvisations of Charles Mingus and to free improvisers such as Ornette Coleman. I wrote a series of ‘Dawn Choruses for woodwind’ that sought to evoke the experience. I developed a ‘time-structured mapping’ system to allow musicians to bring their ‘own equal song’ within an integrated structure, but it was only when, over twenty years later, I began creating ‘immersive scores’ for sounds that were in different spatial locations and making ‘simultaneity’ recordings (made simultaneously in different locations then played back together to give a ‘God’s ear perspective’ of the world) that I began to feel closer to that fleeting experience of my teens. I was striving to create works that combined the spontaneous energy of improvisation, the equality of voices and the structural logic of storytelling.

Finally, more than thirty years later, my journey has brought me back quite literally to where I began, to those rolling Gloucestershire hills at dawn but this time armed with numerous field recording devices. I record simultaneously at sixteen or more locations within a defined area in order to re-create that dawn chorus at the winter garden in New York via what I call the ‘iForest’: an array of independent speakers dispersed through the space that enable me to move and control sound above, below and around the space as part of a larger 24 hour work.

My thirty year journey from that original experience has led me to include my own species; the song of the human: I’m drawn to explore the nature of being human alongside humanity as part of nature. To do this I’ve found it necessary to create a physically dispersed sound world that may be experienced by walking within it, where equal parts may be considered in support of a whole rather than the convention of a melody supported by harmony, where each person’s experience is individual depending on the path and time they choose.

As an artist all one can ever do is to say ‘this is how I see things’ and offer that vision back to the world. My hope with this piece is that, in whatever ways, small or large, it inspires deeper appreciation and connection to nature and to our part within it.

About The Immersive Forest

The Immersive Forest (iForest) is a creative infrastructure developed by composer, Pete M. Wyer. The iForest presents sound works distributed across a chosen area via independent speakers which may be inside or outside. Sounds and music in the iForest can be changed in the same way that a theatre changes productions.